I spent two years at Notre Dame—two years that I designated as time to take a break from my evangelical heritage. I did not convert in the end, but many friends did. In those two years, I often felt like a pilgrim passing through Notre Dame’s Marian-haunted spaces. But its sacred spaces shaped me in ways I only recognized in retrospect. It was here that I truly cut my theological teeth on Augustine and Aquinas. It was here that I witnessed my first mass, here that I first made the sign of the cross, here that I converted to the religion of Notre Dame football, and here that I came to embrace the Protestant catholicity of my apostolic faith.

When you are on Notre Dame’s campus, you almost always stand in the shadow of Mary. If you walk south from the Golden Dome, you’ll even find a statue of Jesus looking up at her nineteen-foot figure with his arms outstretched in a posture that leads flippant undergraduates to comment that he’s calling out to her: “Jump, Mom, jump!”

Here, there is a golden resplendence to Mary that shimmers through even South Bend’s infamously grey winters. But the Mary that we encounter in this text, and in her Magnificat, is not Our Lady glorified—at least not in the expected fashion.

Mary’s glory, here at the beginning of her story, is shrouded by her consternation and surprise. This is not how things were supposed to go. This is not the sort of place that an angelic messenger is supposed to show up. In Luke’s text, Mary is confronted with a brilliant moment of grace, but one without pretense or worldly stature. God claims Mary as his favored daughter, his beloved. Like the unclean woman of Mark’s gospel who touched the hem of Jesus’ garment, Mary believes in God’s power, and yet seems afraid and disconcerted.

You can understand why. Mary was in a position of profound vulnerability: pregnant unwed young women could not simply go around proclaiming that they were God’s chosen vessel. What would everyone think?

Despite all this, God claims her as a favored child. Like the unclean woman in Mark, she becomes the treasury of God’s grace for the world. Similar to Abraham’s call, she becomes mother of the faith given to many nations. She is the first member of Jesus’ new family: precious, spotless, a testimony to God’s preferential love for those who need Jesus the most, who audaciously cling to the hem of his garment to receive his glory.

Those of us who look to Mary as our mother—Protestant and Catholic alike—have many differences, several of which have kept us out of formal communion for centuries. I don’t want to minimize these differences. But there is something remarkable about this occasion, this joint vespers: Mary’s squabbling children are gathered here under the same moral vocation: to cast down the mighty from their seat, exalt the humble, fill the hungry with good things, and send the rich empty away. We are here to cling boldly to God’s glory contained in the meekest of vessels, and remind God what God promised to our mothers and fathers.

Mary’s calling and special status is not one of obvious magnificence. Her glory does not always cascade down in golden resplendence for all the mighty to see. It is more commonly found in acts of humble obedience and service to the downtrodden. It is found in the most unexpected places, where those on the periphery store God’s promises in the treasury of their hearts.

The great French Dominican theologian Yves Congar wrote in his classic work True and False Reform in the Church that Christians are beset by twin temptations: contentiousness and oppressive conformity. He describes the former as the characteristic sin of the reformer; the latter temptation he assigns to those with privilege. In his own day—which is not so very different from our own—he was especially worried about the sins of institutional privilege, the sort that “stifle prophetic impulses” like those present in Mary’s Magnificat. Those who stand on the periphery, like Mary, have every right—every obligation—to seek ecclesial and social recognition from those at the center of power. And those who by chance or accomplishment find themselves at the center must “attend to the periphery.”

“When the sap is bubbling in a tree,” Congar continues, it is a welcome sign of “growing pains.” So the church must be on the lookout for unexpected angelic ministers, unmarried pregnant prophets, and all who wait—like Mary—for the ultimate unveiling of divine glory in the person of Jesus.

In Jesus ‘ final moments, after all, it is Mary who stands in his shadow, at his feet beside the disciple John. As the earth shakes and the temple veil is torn—giving us the fleeting glimpse of God’s unfiltered radiance—Jesus gives to Mary a new son, and to his beloved friend a new mother.

With his dying breath Jesus gives us a testament of unity, the promise of a new family formed in the glory of his death on empire’s cross.

It is my hope that we have a briefest foretaste of that unity here, all of us daughters and sons standing this weekend in our mother’s shadow. 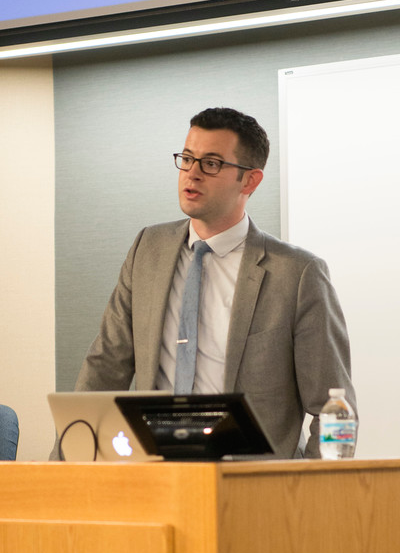